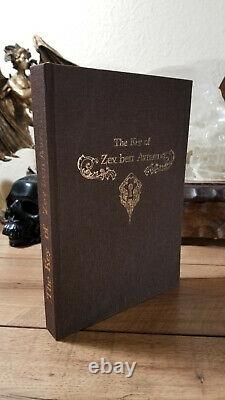 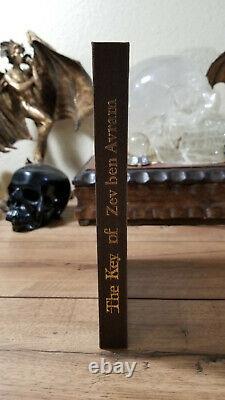 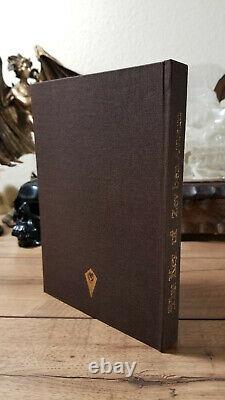 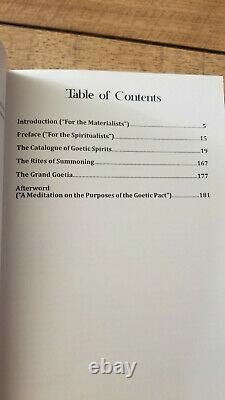 Books have their own destiny. Everything is PACKAGED VERY WELL IN BOXES for protection. PLEASE NOTE: Only the book is being offered - the background items seen in the pictures do not come with the book. Small, light scratch at top left of front cover. Please look at all of the pictures carefully for condition before purchasing.

The Key of Zev ben Avram --- (First Edition - Published by Fall of Man in 2020). From the publisher: In every generation, the burden must be taken up anew. Ceremonial magic is by its nature an art defined by mysticism and mystery, which is to say, by obfuscation.

This is doubly true of goetia, with its frightening demonic drama and its grandiose claims. The impenetrable allegories, the coy vagueness, the secrets and initiations, the smoke-and-mirrors. These things are integral to the sorcery, they are part of what makes it work, and so they cannot be lightly tossed aside to assuage a skeptical public. All sorcerers are liars, and there is good reason for it.

But the fact remains that our society is gluttonous for information, and that magicians and would-be magicians have as much share in the gluttony as anyone else. At some point, someone must pull back the curtain and account for what is actually going on, at least to some extent.

There is a demand for understanding, and so there will be a supply. If the understanding does not come in the form of lucid truth, then it will come in the form of fraudulent nonsense, or else in the form of a sneering dismissal: it's all charlatanry and crankery. The nature of the craft must be explained in the idiom of the day, or else the craft as a whole will suffer the consequences. This is where The Key of Zev ben Avram comes in. Devoid of any unnecessary prose, this quintessential grimoire delves directly into the specifics of 72 demons, each with its own sigil and detailed description, in a highly practical way. This grand catalogue of Goetic Spirits is the heart of the book , followed by explicit instructions about the necessary tools and rituals to work with the spirits described within it.

Although far from the Solomonic demons, which are among the mightiest servitors of hell, the entities introduced in this grimoire are less awful in their wrath, proving easier to work with and bind them to one's will. Table of Contents: Introduction ("For the Materialists") Preface ("For the Spiritualists") The Catalogue of Goetic Spirits The Rites of Summoning The Grand Goetia Afterword ("A Meditation on the Purposes of the Goetic Pact") Zev ben Avram is a metaphysicist, a semiotician, and a goetic sorcerer.

He studied the practice of cabala and conjuration at Harvard University, after which he spent fifteen years in reclusion, honing his craft and developing new bindings. His Key is a product of that work.

In public life, he is a government official, and an author whose theatrical work has been featured in the New York Times. He resides in his native New York City. The Key of Zev ben Avram contains dozens of unique sigils and seals, as well as two full-page illustrations inked by the master artist Kain Morgenmeer. Occult Witchcraft Magic Sorcery Necromancy Voodoo. KENNETH GRANT : A pioneer in creative occultism.

Outside the Circles of Time. In these books you will find everything from Sex Magick , Qabala , Gematria , to alien praeter-intelligences who have established communication with magicians, sorcerers, and workers of arcane practices.

One of the most popular titles in the Typhonian Trilogies is Nightside of Eden , dealing with the reverse, dark side, of the Tree of Life and its demonic denizens. ALEISTER CROWLEY : The Great Beast, no introduction really needed here.

Aleister Crowley is known by occultists and non-occultists. He wrote numerous books on Magick which are still being republished today. He is also widely known for his role as the head of the O.

The books we offer expand numerous occult topics. The following are short definitions of some of them.

The definition of occult simply means hidden or unseen. The occult books we offer deal with what may be termed spiritual occultism. Dealing with the hidden, the unseen realms of spirits and spiritual energy. This spelling for magic with a "K" was used by Aleister Crowley to define spiritual magick as opposed to mundane magic, such as pulling rabbits out of your top hat.

Magick deals with spiritual forces within yourself and within the universe. Historically, witchcraft was seen as a diabolical pact with the Devil. We've all heard of the witches riding to the sabbats on their broomsticks after anointing themselves with magical oils where they would dance and fornicate with the Devil and his homeboys. Today, however, witchcraft is not seen in the same light. Can incorporate some dark spiritual aspects, such as the modern.

However, deals with pagan gods and goddesses and has a creed of "harming none" and is basically nature worship and spell-casting, and herbal work. The books we offer on sorcery you'll find are of a darker nature. Where darker aspects of occultism are employed in a folk-magic style. Like in traditional witchcraft, herbs, oils, bones, dirt, colors, sigils and darker spirits are employed for tasks. Necromancy uses various magical tools and techniques to speak with, communicate with, and call forth the dead.

Necromancers usually employ human skulls, bones, and other items of the grave in their dark arts. Books of ritual magic instruction are usually termed grimoires.

These grimoires have been around for centuries. Some teach you how to call up spirits of certain natures, cast spells, curses, make pacts with demons, and much more. Modern grimoires are what you will mainly find we offer. We live in the modern age, therefore, we try to offer grimoires more in sync with today's modern witch, magician, sorcerer or necromancer.

The books we offer on voodoo are for the more serious practitioner. Our books on voudou, voudoun, santeria, palo mayombe are written by initiated students.

These books are not geared toward teaching you "voodoo spells" but rather they focus on deep, African-derived spiritual systems. Be sure to keep checking back as we add new books constantly. We offer very select titles for serious occult students and practitioners. Your patronage is very appreciated!

This item is in the category "Books & Magazines\Antiquarian & Collectible". The seller is "desert_owl_occult" and is located in this country: US.